Every Picture: Then and Now, Curfew Tower 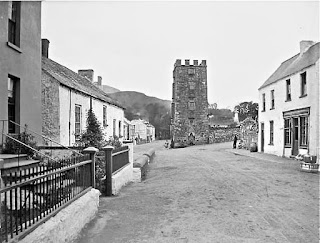 Curfew Tower in the olden days.


The Curfew Tower, in the centre of Cushendall village, was built around 200 years ago by the local landowner, Francis Turnly. Its purpose then was to confine riotous prisoners. The tower, also known as Turnly’s Folly is four storeys and 40 feet high. It is built from red sandstone rubble and has a medieval appearance with turrets and a narrow ironclad door.

It is currently owned by artist Bill Drummond, formerly of The KLF and the K Foundation. Famous for burning a million pounds in 1994. Since 1999 the Tower has been run as an artist residency. 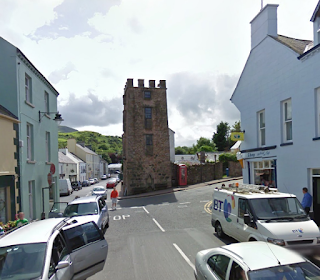 Cushendall and Curfew Tower now. As usual, the village is choked with traffic.
Posted by Nelly at 9:48 pm