Every Picture: Not On Call 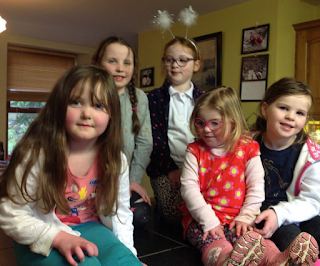 I had this little lot for a play date this afternoon and the two to the left of the picture (darling and well-beloved grandchildren) I had for a sleepover. Did I say sleep? There was precious little of that to be had. Thanks to some bad management by the older folks in the house on the previous night, the wee folk went to bed in a state of over-excitement.  Consequently, the one with all the hair crept into my bed 'for a cuddle', waking me up at around one a.m. while the one in the braids wanted to go downstairs to watch television at two a.m. Both girls thought they'd been in bed for hours and it was morning already. I've been tired ALL DAY.

It's an all too common mistake that grandparents make for we should aim to be as boring as wise parents are after the hour of six o'clock.

I often think as I go to my own warm and peaceful bed of the many nights I used to spend doing sleepovers in the hostel in Spide City. Back then I'd long for the evening to end, so I could climb the stairs to the staff sleepover room and wind down from a very long day. Each night on going to that little single bed I'd hope (even pray) that the night would be uneventful but there was that phone next to the bed that the police could ring, that social services could ring, that another damn hostel could ring and I'd pray every night that no-one would ring. And then there was that intercom outside the bedroom that residents could call if any concerning issue should arise. Oh Lord! I prayed too that it would not buzz. And since then, almost every night that I go to my own dear bed in my own wee house I feel a deep delight that I an not on call. I'll appreciate it tonight that I can sleep all night, not on call until 5:20a.m. when Youngest Daughter wakens me to drive her to work. Bliss.
Posted by Nelly at 11:08 pm