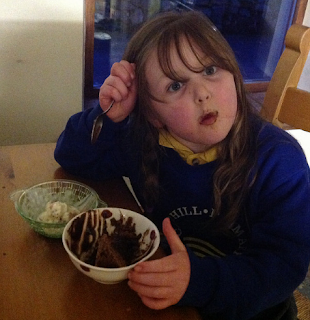 The Heavenly Chocolate Pudding went down well even though it stuck ever so slightly when I was sliding it out of the pudding basin. I use, on Nigella's recommendation, a plastic bowl with a lid and I expect I didn't butter it enough. This would be Ben's fault as he stayed here on Saturday night and ate, in addition to his evening meal, his mother's entire chocolate stash, a loaf of bread, three-quarters of a pound of butter and nearly all the cheese. That's teenage boys for you. So, the pudding was not quite as photogenic as the one in my previous post and there was me with yet another pretty narcissus plate to pose it on. That will be one for another time.

Nevermind food photos. What could be more photogenic that Miss Tis cand her chocolate face? Much nicer that any daffodilly pudding plate.

It's Martha's turn to pick the menu next week. She just wants beans then a sponge pudding covered in whipped cream and sprinkles. We will add sausage and mash to the beans for a more balanced meal.

When it is my turn to choose (I'm last because I'm the oldest) there will be plum torte for dessert.
Posted by Nelly at 10:06 pm