Even though I've been living on this road for more than twenty years I don't really know the neighbours that well. Obviously, we know Clint but then we did sell him the property, the first one we had on the road. And then there is the guy that laid the lino. He was actually mid-job when he told us he lived down the road. His daughter turned up at a barbecue once and she was here for a couple of hours before I even realised she was a neighbour. And there's Mr Twinkle, the one with the boating lake but I'm not sure he even lives there anymore. There's Jimmy but sure, everyone knows him. Our nearest neighbours on the road I don't know at all, wouldn't recognise them if I met them in the Spar yet, as of yesterday, there has been social media conversation. That's modern day communication for you, it's like texting someone in the next room or Facebook messaging your daughter from the kitchen to her bedroom.

It happened like this - I was on Twitter looking for information on something that had occurred locally and I came across a snippet of film taken in the Cullybackey area. The camera man (our neighbour) had filmed it using a drone. The special thing about the film was that it was taken on a very foggy morning so was tremendously atmospheric.

I retweeted it and sent this message, 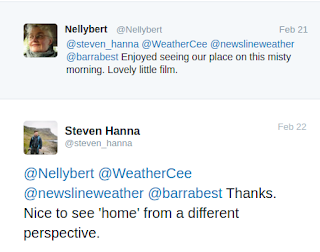 I hope Steven won't mind if I share this screen grab from his film. The foreground shows our own wee hame and the woods behind. I think the mistiness is rather beautiful.

I called this post A Buzzard's Eye View even though I reckon no sensible buzzard would ever venture out on a morning like that.
Posted by Nelly at 11:24 pm

That's beautiful, wish I was there :)

If you were here you could help me drink this White Currant wine.