Every Picture: Off to Casualty

I am still finding it hard to dash off these daily posts despite my so-called bright idea of basing the post on a picture. Sure, I do that most times anyway except in reverse, write a post and choose an image or images to accompany it.

In the meantime I am considering bigger and better posts such as the one on old Ballymena and the one about dogs based on Brian Sewell's book, Sleeping With Dogs. The thing is, these are pieces that cannot be dashed off because they need a little bit of thinking about and also some research. I'd like the history piece to be as true as it can be and I'd like the dog piece to be as honest as can be. Meanwhile, I'm addicted to online jigsaws though hopefully have now scundered myself.

But old pictures spark memories (which was my original intention) and this one is no exception. 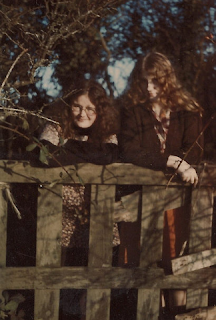 It is a scan from a polaroid taken by Mick, my first husband and the children's father. It was taken before we got married. Mick was living in England as Englishmen often do and I was back home in Ireland, living at home with Zoe, our daughter. He came over as often as he could and when he did, Daddy handed over the keys to the car and we went on lots of jaunts. Every time, it seemed that one of those trips would be to A&E or Casualty as it was then known.

The picture was cropped and the person cropped from it was Kerry sister, then aged about fifteen because she was 'ligging about', pulling faces and ruining the good photo. Polaroid film was pretty expensive back then. But, oh! what a novelty to have instant photographic gratification. We take so much for granted these modern days with our digital cameras.

Anyway, a short time after this picture was taken Kerry Sister must have 'ligged about' just once too often for she sustained a bad cut and, of course, it was off to Casualty, Mick driving. You know I cannot remember where or how she lacerated or punctured herself but I do remember seeing from underneath the curtained cubicle her trousers drop as the nurse administered the dreaded tetanus injection in the bottom.  Another thing I recall is that we were in and out of that hospital department in far less than an hour. Maybe we didn't have all the exciting technological gadgetry back in the 1970s but there was no hanging about in Casualty.

I've decided if you can take the time and trouble to delight and entertain with a daily blog post, the least I can do is comment! i loved that Brian Sewell book! It very much rehabilitated the man, who I thought was a one dimensional stuck up eejit till then!

Thank you, Andrea! I quite agree with you about how his love of dogs added another dimension to the perception of Sewell. I'm still reading it, not wanting to rush through it and held back, just a little, by the knowledge that each chapter introducing another dog or dogs will have the saddest of endings.