Every Picture: Camino By Sea 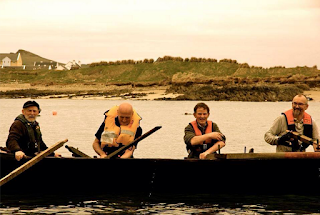 We watched this really interesting programme on TV tonight about these four guys from Kerry who rowed a traditional Irish rowing boat, a naomhóg, from Dublin to Santiago de Compostela in Spain. They were following the ancient route taken by Irish pilgrims on the way of St James, also known as the Camino. I've been following this tale myself for several years as one of the pilgrims is my brother-in-law, Brendan. He's the smiley one with hair. 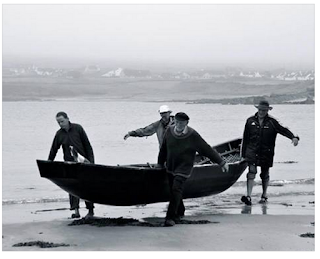 All these fellows live by the sea and are keen boatmen.

I've heard a lot about the trip but it was sobering to see them in their tiny craft in those big waters. Thankfully, they were accompanied on the first leg of the journey by a support craft, a yacht, and it was just as well as the sea became very rough on the crossing to Brittany and they needed its help.

All the men said that they learned a lot about themselves on the journey. I may have learned something myself. When life doesn't go to plan just keep moving forward and things will probably work out just fine.

From the Irish Times

And a snippet from the film

Well, I am just lost in admiration and cannot wait for the next chapter.

The second part is on TV this evening. Irish channel TG4. I think viewers in England, Scotland and Wales can get it on one of the RTE catch up channels.

It was good wasn't it? I watched it properly this evening. The next episode is actually next Sunday.

Yes. So Tricia told me today. Sorry Andrea for misinforming you.