Martha has been hinting for a while now that she wants a pre-loved bicycle to keep at our house. Her 'hints' have, in the past, involved her physically pushing me towards bikes for sale in charity stores and I have resisted, telling her that we'll think about it in in the spring. She has a good bicycle at home but it's not convenient to bring it here. Here, there is a bicycle in the shed which is supposed to be Martha's but she never rides it.

Then there was today. Evie has a pretty pink bike that Martha rides at every opportunity. Today they fought and squabbled over it until I was almost demented.

Why can't you ride your own bicycle?

Because the handlebars are too low.

He tried but they won't move.

Let me see you riding this bike.

So she gets it out and starts riding. Her knees are practically level with her ears as she pedals. I can see why she prefers Evie's bike.

O.K. I can see that is no good. We'll look at those bikes in Ahoghill.

Can we go now?

It's too late. Charity stores close at four o'clock.

What about Halford's? It will still be open.


She got it. We're going to look at bikes at the mid-term break. 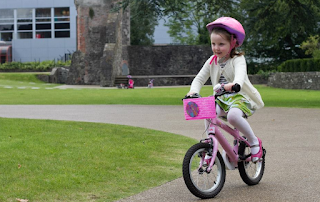 On looking for a picture to accompany this post I found that I have no pictures of the girls on their bikes. This will need to be remedied. Meanwhile here's one of the parents' pictures. It's over two years old and I think she was probably close to outgrowing that bike too.
Posted by Nelly at 10:49 pm

That photo is so lovely!

I thank you on behalf of her parents most likely her dad.