We had six callers this evening come to look at the pigs. One of them was Curtis who is a long-time fan of Rusty and Lily. You could even say they've grown up together. It is Curtis' auntie who wants to get a couple of kune kune piglets and he told her that he knew where she could see some fully grown ones. Rusty and Lily had retired for the night but the smell of freshly cut oranges soon roused them from their bed to meet their visitors. 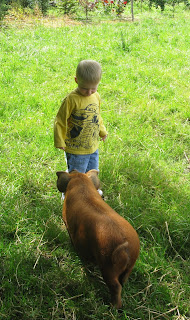 At first Curtis' auntie was surprised at how big they were but we pointed out that it's not that they're actually especially big, they're just wide. We held nothing back. They break out. They're rough. A male will rip the side out of a collie dog with his tusks. They steal food. It was no good. The sheer cuteness of Rusty and Lily could not be denied. They just won everyone's hearts. 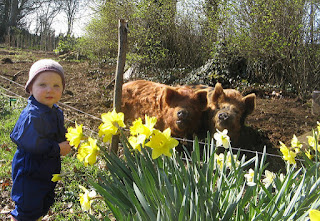 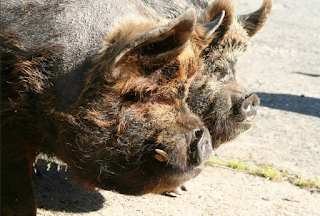 They are cute with Martha and Curtis. LOL I can't see them in my condo tho. LOL

Oh no, I want a pair myself now!

They are way too rough for indoors Mage. Andrea - why not?