Martha chose the menu for this evening's meal. She chose chilli - a new favourite and chocolate birthday cake for afters. Her birthday's not until tomorrow but traditionally (been doing it for a couple of years now) I always make a birthday cake on the Monday closest to a person's birthday.

I went to a lot of trouble with the cake. None of that bunging it all into the food processor and whizzing it up like Nigella recommends. Oh no! I'm out with the Kenwood, proper caster sugar, softened butter creamed to whiteness. Then add the (sifted) flour and beaten eggs bit by bit. Lovely stuff. Then into the tins, into the oven and I'm off for a wee break on the worldwide web to check up on the Emmys. Twenty-five minutes later Bert interrupts me.

That timer thing on the oven is chirping. I nearly didn't hear it because of the radio dinnling away.


Oh dear. I didn't hear it at all for I'm occupied looking at the fancy dresses on some women that I've never even heard of.

The cake was, of course, burned. Only slightly but enough to depress me. I shaved the burnt bits off but it still wasn't right. I decided to go again. This time I bunged everything into the processor. No caster sugar as I'd run out so used ordinary and a bit of Demerara. Bunged it into the tins, the oven and kept a very tight eye on it. Came out perfect. Then I decorated it as instructed. Chocolate glace icing, ugly orange dog, eight pink candles and green smarties to represent the grass that the dog was supposed to be sitting on. I added some pink smarties and a glittery candle in the shape of an 'eight'. It was a horror show. Martha loved it. Even though the dog had slipped back and was teetering at the edge of the cake.

Meanwhile, Bert, Hannah, the girls and six dogs had disappeared into the woods to look for fungi and fairy rings. There was some sort of tale about stepping into fairy rings and disappearing and however they managed to create this illusion, Bert was completely taken in by it. Apparently. They were full of stories about it.

It was yet another amazingly successful birthday dinner at Nellybert's. I really love being a Granny and I know Bert feels the same about being a Granda. If the weather holds we'll take them out in the camper van at the weekend. Just the two dogs though. Fingers crossed. 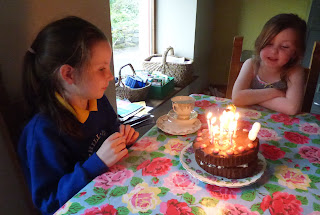 Eyes open wide in wonder!
I wonder if they took some of the chocolate cake home with them for later or did they leave you a bit for your tea?

They took it home with them. I was able to cobble together another half cake from the unburnt remains of my first effort.

Gee, you answered all my questions. Was that half cake good?