The first day of September has turned out a beautiful early Autumn day - a day spent mostly in the garden, weeding and digging up perennials that have become to big for their current spot. Most will be moved to a new home, others will be shared with gardener friends. 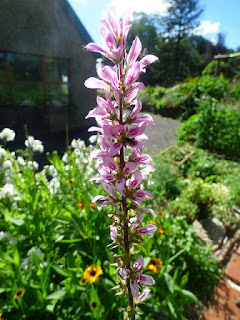 This is francoa sonchifolia given to me by Howard. I planted three of them. I'm sure Howard told me how big they would become but I did not retain the information. They have outgrown the bed they are in and are being moved. 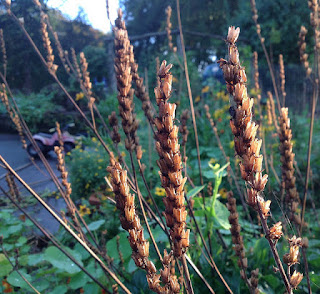 He did tell me that they were profuse self-seeders. Each of those seed heads contains thousands of dust-like seeds that rustles when brushed against. 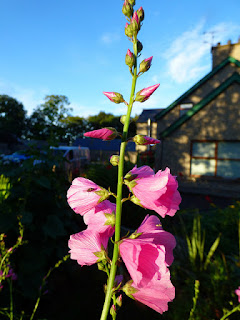 This very pretty flower is sidalcea, commonly known as prairie mallow. It was a gift from Anna (my mum's friend and neighbour) and she told me she had it from an old friend in Armoy. It's an old-fashioned plant that this neighbour had in her garden for decades. The bit I got from Anna was tiny but it has quadrupled in size in the past two years and I was able to split it today. It will be moved into the space formerly occupied by a huge daisy like flower and the francoa. Hopefully next year I will be able to split it again and share it with my sisters.

What else did I do on this fine day? I took to the hedgerows to gather blackberries. Enough for a gallon of wine and a blackberry crumble. Wine and dessert will be made tomorrow.