If this post wasn't called '22nd September' it might well be titled 'Stuck In The Mud' or maybe 'Liar, Liar'.

Back story - the fields are wet, very, very wet. For most of the day, Bert had the pigs in what he calls the back garden. Then he decides they should go out to the fields because tomorrow we're going out in the camper van and they'll not get much of a chance to eat grass. But, this evening they wouldn't come in at supper time. I don't get to hear about this until eight o'clock.

What time did you put them out?


I say to Hannah,

Did you see where they were when you went for that walk in the woods?

They were still closed in that yard when we went out.

What time was that?

You didn't put those pigs out until after five. They don't think in terms of time. They'll be out there eating grass until past our bedtime.

Oops, Bert. Sorry for dropping you in it.


This is Bert being Bert. He thinks short-term. Doesn't think of the bother he'll be giving himself hours or days down the line.

Sure they'll be alright. They've got access to the cattle shed. They'll come in when they're ready.


This is not likely. On previous occasions when they've been put out to grass very late they eat until they are full then lie down at the back of a hedge, Normally this might be OK but the fields are saturated, it's autumn and Rusty has a history of pneumonia. I'd rather they were in their cosy warm stall no matter what time of the year it is. So I donned wellington boots, took a torch and went out to look for them. Eventually, I found the grass munching stop outs but not until I'd lost my footing, fell over and got clarried in glaar from head to toe. Luckily I'd had a very nice dinner and a glass of wine so found this amusing.

Tomorrow they'll be staying in the so-called back garden where the grass is sparser but I'm leaving word with Hannah that they are to have extra treats at supper time which should make up for it. I don't think she'd enjoy searching for lost pigs and falling into mudholes as much as I would.

I really should have got someone to take a picture of the state of me when I came in from the fields. Anyway, here's one of the pigs. 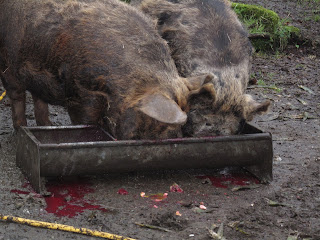 That red stuff is not blood. It is the remains of mashed blackberries left over from wine-making. It will be slightly alcoholic, something the pigs do not object to.