Bert finally got around to reading Saturday's Guardian.

It makes a very depressing read,

D'ye think so? It's just that at the moment there is a lot of stuff going on that is affecting America, Europe, here. Nobody really thinks about the floods in India and Bangla Desh or, the horrors in Syria, Yemen and Myanmar. We only care about what happens to ourselves and those most like us. And! Talking about depressing - did you read John Crace's bit about London being a few hundred miles closer to Pyongyang than Los Angeles? Best not to think about all that stuff.

Huh! It's hard not to be depressed when you look out at that!


And he looks through the sun room doors at the rain sheeting down just as it has been for the past week or more. I refrained from pointing out that at least we don't live on the Florida Keys.

I'm sure I've mentioned before that Bert is very sensitive to unpleasant weather which is why I find it strange that he is happy to slugabed on fine, sunny mornings. You'd really think he'd want to be up and about enjoying the balmy weather. 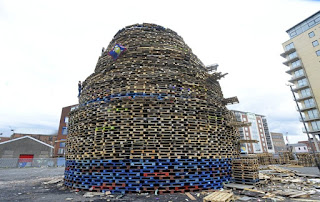 Later I ran out of self-raising flour and had to make a quick dash to the local Spar. Whilst waiting in the queue I perused the headlines of the local papers to see if I could find something to elevate the spirits. The Irish News led with a story that loyalists had planned a bonfire on every corner in response to the suggestion of injunctions preventing them building boneys on council land. That would have been fun for everyone. But hardly earth-shattering news. The Belfast Telegraph's big story was that the farmer who was killed by her cow last week was  'ready for Eternity'. Good news indeed if you like that sort of thing.

Back at Springhill the heavy downpours continued but, despite this, Bert's mood improved for it was Monday and Evie appeared soon after 2pm. She spent an hour jamming with Hannah then Bert and her went out to play. That always cheers an old granda up.

For supper we had sausage, mash and beans then coconut cake for afters and we pretended it was still my birthday. There must be no cake until next Monday when we will pretend it's Martha's birthday. She is eight the day after and wants either Elsa or Winnie the Pooh figurines for her cake. If these decorations cost me more than three pounds they will be on all her cakes from now until she's twenty-one. That's a promise!

https://www.theguardian.com/lifeandstyle/ng-interactive/2017/sep/09/stephen-collins-on-autumn-cartoon
Posted by Nelly at 10:10 pm

Then again, you can come visit us here in California.

That would be lovely.