Woke up at six o'clock on the dot. I am still operating on Hannah Time but, since Monday, she has been driving herself to work. I've got a bit of a cold (Thanks, Rod!) so turned over and slept until eight. Wakened by strange noise coming from below. Tried to figure it out before realising it was a low but insistent yipping from our two guest dogs Frank and Dora. Time to get up.

Another day in paradise.

Which I spent in the garden, weeding, digging up plants and putting them somewhere else. After a while Bert came out to help. That man is amazing with a fork and spade but moves far too fast for me. There goes my verbascum phoenicum 'Violetta' discarded along with a dandelion. I repotted it. Next to be rescued from the weed pile pieces of my lovely yellow crocosmia. Although I don't know why I bothered as it actually does grow like a weed.

This is where I put Anna's sidalcea. 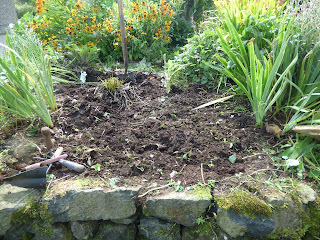 It had wilted a little but a top dressing of our own compost and a good watering had it looking a lot better. 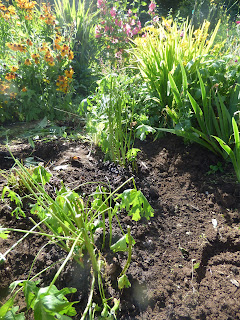 Very much looking forward to seeing how it does in its new home. I couldn't resist doing a little bit of propagation. If it grows it grows. All in all a most enjoyable day.

Hello Nelly. There's nothing like an hour or two playing in the dirt is there. Hopefully when our rain ceases and it gets a tiny bit warmer that's what I'll be doing. Spring is acoming and some beds near clearing of winter 'rubbish'.
I must look out and see if that 'old plant' is available in some of our old style nurseries. I take it hot weather doesn't bother it? ~ Cathy

I think it originates in the United States and is used to hot summers and chilly winters. It can also be grown from seed. Today's weather is wet and cold so outdoor gardening is off the menu. However, there is a lot to do in the polytunnel.