Dog-wise, Nellybert's has been extremely hectic this evening. We've had our own regulars Judy, Jess, Roy and Ziggy along with our weekly boarders Frank and Dora whose humans are holidaying in Spain. Then along came Rex (full brother of Jess and Dora) who came with Swisser. That was seven of them then brother Joe called. When are you off to Italy? I ask. Tomorrow says he. Are you still alright for Jack?  Of course, says I. Although I had completely forgotten. He'll be overlapping a day with Frank and Dora and I forgot about them too. That's how it is. You ask me many months in advance if we'll look after your dog. I agree that it will be no problem. Then I forget all about it but it always turns out OK.

Turns out better than Jack and Rex's relationship anyway. They had two big rows and Rex had to be banished to Swisser's car. Personally, Bert and I (and Hannah) don't agree with un-neutered male dogs. Except for Roy but he was in double figures before we took him on and I thought surgery at his time of life an unnecessary trauma. Ziggy and Frank have been 'done'. So there we were with three fully intact male dogs, Roy, Rex and Jack. Roy took no part in the shenanigans but Rex and Jack were very much at loggerheads.

Later when it was just Bert and myself and Roy and Jess and Judy and Frank and Dora and Jack (Ziggy had retired with Hannah) all watching Narcos I pondered on how Frank was my current favourite dog of all time and he's not even my dog. But we get on great Frank and I. Wasn't always so for I used to hate him because, when he visited, he always pissed all over the house. I don't mind that now. Gradually, over the years, we have less and less carpeting so pissing, although not encouraged, is less of an issue. Boy dogs just can't help themselves.

But Frankie. He's old now. Well into his mid-teens and he's so dignified. He's vulnerable too but we don't talk about that. We pretend he's still the macho dog he always was. I love him. He's a big part of the fabric of my life for we've only got a few more years and they're precious to me. 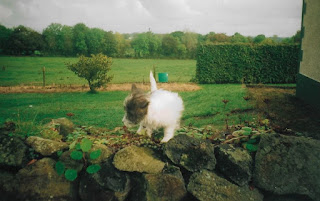 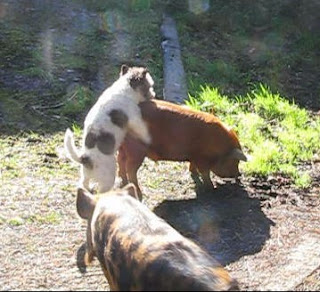 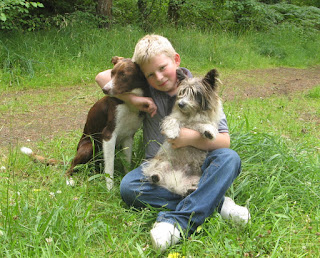 Frank with Ben and Judy
Posted by Nelly at 10:32 pm

Cathy, this frazzled grandmother calls everybody by the wrong name. The dogs are the only ones who don't mind!

What breed is wee Frank? No matter he's a cutie! I have threatened Willie (neutered) with a shortened life span if he doesn't quit with the peeing in the house. He hangs his head and goes to his bed, next thing I know he's done it again. It will be better when I have hardwood floors again.

Frank is a total mongrel. There must be a little bit of terrier in him. Not Jack Russell as he is too soft-natured. We have a Jack staying with us at the moment and our cats are not pleased. He hates them.

Ah Frankie looks a character. My own little "Boy" still wees on the lino in the kitchen regularly - the people that spent a small fortune on him at a breeders disposed of him once he was about a year and a half having neglected his house training as a puppy. I often wonder how they got on with the dog they acquired immediately after ..... a great Dane!

The last of the rugs left the house yesterday after an influx of dog visitors. All washed with white vinegar and left in a shed to dry. I may never return them to the house!

A Great Dane! You'd have to hope the house-training was very thorough.