Bury Me Under The Mountain Ash 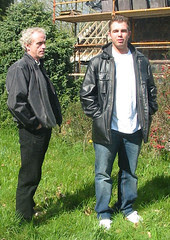 Vancouver Bro & Rube
Originally uploaded by NellyMoser.
Matty has been in TV heaven this past two days. It started yesterday with the funeral of the Holy Father and then there was Ken and Deirdre's wedding in Coronation Street. Today she had the Charles and Camilla Wedding and the Grand National. I watched the Grand National with her. I was shouting for Clan Royal and Tony McCoy because Tony started his career up the road at the late Billy Rock's place. Matty, being deaf, did not realise that Tony was out of the race until it was over. That is a terrible affliction because it is so hard to keep up with what's going on. Vancouver brother told me that himself, the mother and Rube were in Ditty's of Dawson City the other day. She's well known in there ever since the day I ended up hoking through their bins for my false tooth. And of course coming in there accompanied by two handome fellows had the friendly, chatty one straight over to her. The chatty one tells me ma, "Y'know I buried my husband the other week?" Matty beams up at her and says "Och, that was nice for you."

Poor Matty has been through the mill recently. Last week she had a very horrid procedure (an angiogram) carried out to determine what was causing her frequent angina attacks. The finding was that one of her arteries was 'just fine', another 'not too bad" and a third was 90% blocked. After a hard day at the hospital, which included lots of lifestyle and dietary advice, she returned home starving and requested an Ulster Fry. Which was cooked up and served by the Vancouver brother whose skinny arse, I proposed, should be taken out to the yard and given a damn good kicking.

She was a bit wrecked for a few days afterwards although it didn't stop her going out jaunting with Vancouver brother and his stepson Rube. Matty loves Rube. They met about twenty years ago when Rube was three. She made quite a pet of him and used to carry him around distracting him from his tantrums with stories and silly talk. She'd have a job carrying him now that he's 6'4" and built like a brick shithouse. When Rube stands next to Vancouver brother he makes the bro look like a wimp even though Vancouver bro's just an inch short of six foot.

But to get back to the Papal funeral. I only saw the tiniest bit of it as I was at work. I did like the coffin because it looked so unassuming and simple. I had a yarn about it with Hans from the garage,

Turns out it was cypress. Kerry sister (the carpenter) will have noticed the big dovetail joints. Turns out it goes inside a hermetically sealed zinc coffin which is encased in an outer cedar coffin. Not so simple after all. But still - have to beware the sale of relics ending up on Ebay.

Which brings me to this. I want a simple coffin. No walnut veneers or brass handles thank you very much. I want an ecopod and, if it can be arranged, a woodland burial. If I must end up in a municipal graveyard then so be it but I'd prefer the corner of a field. Speak to the forestry people and see if the grant Bert gets for the native tree plantation would be affected by placing Nelly, in her deadness, among them. But bear this in mind future heirs - a grave on the plot has to, by law, be brought to the attention of future buyers.

If you can plant a tree on my grave I want it to be a mountain ash. I want none of your fancy Sorbus 'Joseph Rock' or 'vilmornii'. A plain rowan dug out of Drumkeeran moss will do me fine.
Posted by Nelly at 12:39 am

Funnies you should be chattin about that nelly for i was just sayin to dad t'other day that when i die i want a pagan burial too, tho i wont even bother with the pod. jus dig a hole and dump me in. id like a monkey puzzle planted for me. love hannah .

I didn't say anything about a pagan buial. Let it be noted that I have assured Matty that, should she outlive me, she is at liberty to bury me with the full rites of the Catholic Church. I know she wouldn't be able to bear the talk if it were otherwise. She'd have enough to put up with the buzz about the gaily decorated ecopod.

I could say we'll put an auracaria by for you but I'd hope it would be far too big for transplanting by the time you'd be needing it.

How about a pagan wedding? - I reckon that would be pretty inexpensive to arrange.

Like yourself Nelly, i've thought this through. When i go, i'd like to be burnt up and put in a fairly large egg-timer. Not only would this leave my heirs with a rather akward decision over whether or not it had to go on the mantlepiece, as opposed to the garage, but i'd also love the idea of potentially generations of grandchildren being told just what would happen if they 'accidently' knocked over/took into school uncle mick.
mikeyboy

Tony McCoy? Didn't he ride for horses own by the Brown-Kerr's? (Who also must be just up the road from you.)

Mikey - Your descendents could always keep you in the kitchen and put you to use.
Marc - Tony McCoy probably did as Billy Rock trained horses owned by James Brown-Kerr. I don't actually know the family as I am a blow-in. Are they 'far-out friends' of yourself by any chance?

Nelly: Nah, nowt to do with me (or my lot) I have had dealings with them, though. And by God, there are a lot of them.

So you could take a day's shooting at them....? And there'd still be plenty of them left?

Why you not blogging these days?

A day's shooting? A week. You would almost think they were Papish or something.

(As an aside, my name was Anglicisied sometime during the 1800s, from O'Hare to Kerr. See, that was to stop the Brits from oppressing us. Prior to that, from late 1600s onwards, we were driven north (from Cork roots) by the Irish. I am indeed the Most Oppressed Person Ever. Brits and Irish. All have had a go at me and mine.)

As for the blogging, what with two deaths in quick succession, illnesses and trauma, I need to recover some of myself before I venture back to my blog. Else it just be a longwinded woe-is-me livejournal self-obsessed rant. Oh, right, nothing new there then.)

I'm sorry - I did not realise that you had all that going on. You're right to take some time out.

it does seem that the Ecclesiastes quote was a bit too obscure for most. :)

It was used at the funeral mass of a friend last week.

I am so sorry to hear that.

Dear Nelly, tell that skinny-arsed brother of yours that since I make a habit of reconnecting with old boyfriends, and since I have a treasured photo of him in exactly that stance but gazing soulfully over the kerry coastline, he should contact me and stop whining that he does not have a computer. Tell him about internet cafes.

anyresemblance - I'll pass that message on asap. He is thinking about getting himself a computer I hear.