How Angry Am I? 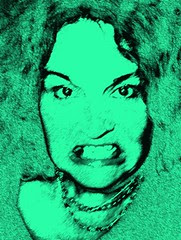 Grrrr Nelly
Originally uploaded by NellyMoser.
Apparently not very angry at all as the following result indicates.

These people are where most of us are at, the more balanced of us. They may be ambitious and have strong aspirations to be successful in their endeavors in order to satisfy their expectancies as well as provide better for their families, but they are not abusive in the process. They won't walk over family, friends, and co-workers to get ahead or achieve their goals. They might be disappointed in achieving less than a high leadership rank, but they accept it and get on with their lives. As supervisors they would tend to promote harmony. They are prone to normal levels of jealousy and envy when others they know gain status over them in terms of career promotions or having a better car or backyard deck. Some at this level may look down on others, measuring their status against them, but it is usually not overt. Among the fives (perhaps also the fours and even the threes) would be those humans we consider the salt of the earth. These are the Washingtons and Lincolns and the characters frequently played in the classical western motion pictures, as previously described, who take the mantle of leadership and handle it gracefully when it comes their way, but then reject enduring dominance and authority when offered to them, preferring to ride off in the sunset.

And this is the quiz.